Every patient has their

Alex fell and broke his arm. He consulted a traditional healer afterwards. Unfortunately, this made the problem worse. Hot herbs caused blisters, which later started to infect. Eventually, Alex ended up septically in the hospital. The doctors amputated his arm just in time.

The moment I met Alex, he was traumatized and insecure. He saw his future fall apart. By feeling incomplete, he felt that studying would no longer be an option. Alex had a high demand for help. He wanted a prosthesis so that people would not see that he was missing an arm.

We have made an aesthetic prosthesis for him. After receiving his prosthesis, he proudly walked through the hospital. Now he could leave the hospital, the place where he had to rehabilitate for months, with a little more confidence.

A few weeks later, he told us that he started studying politics. We wish him well with his education and hope to see him in the cabinet in the future. 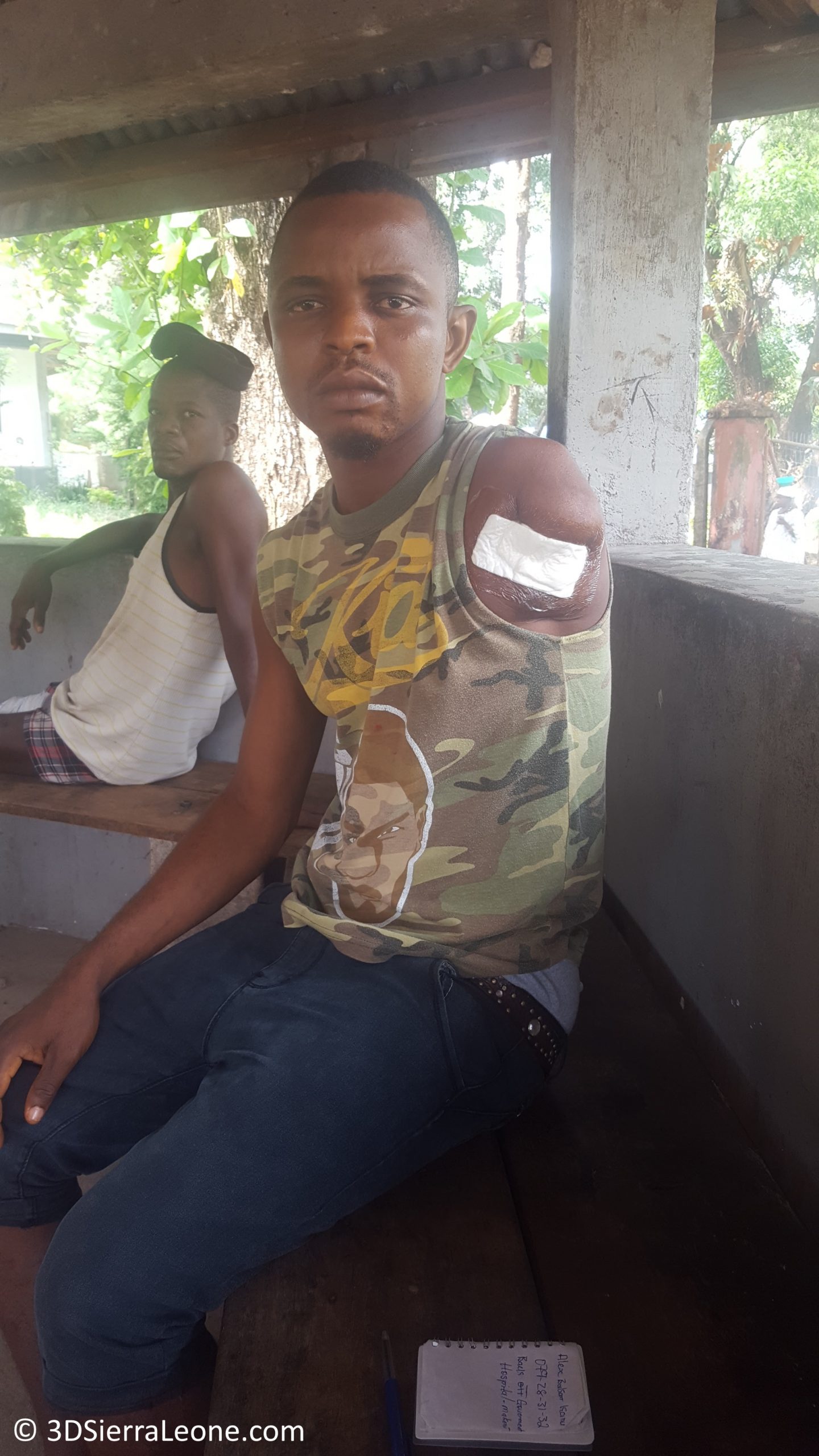 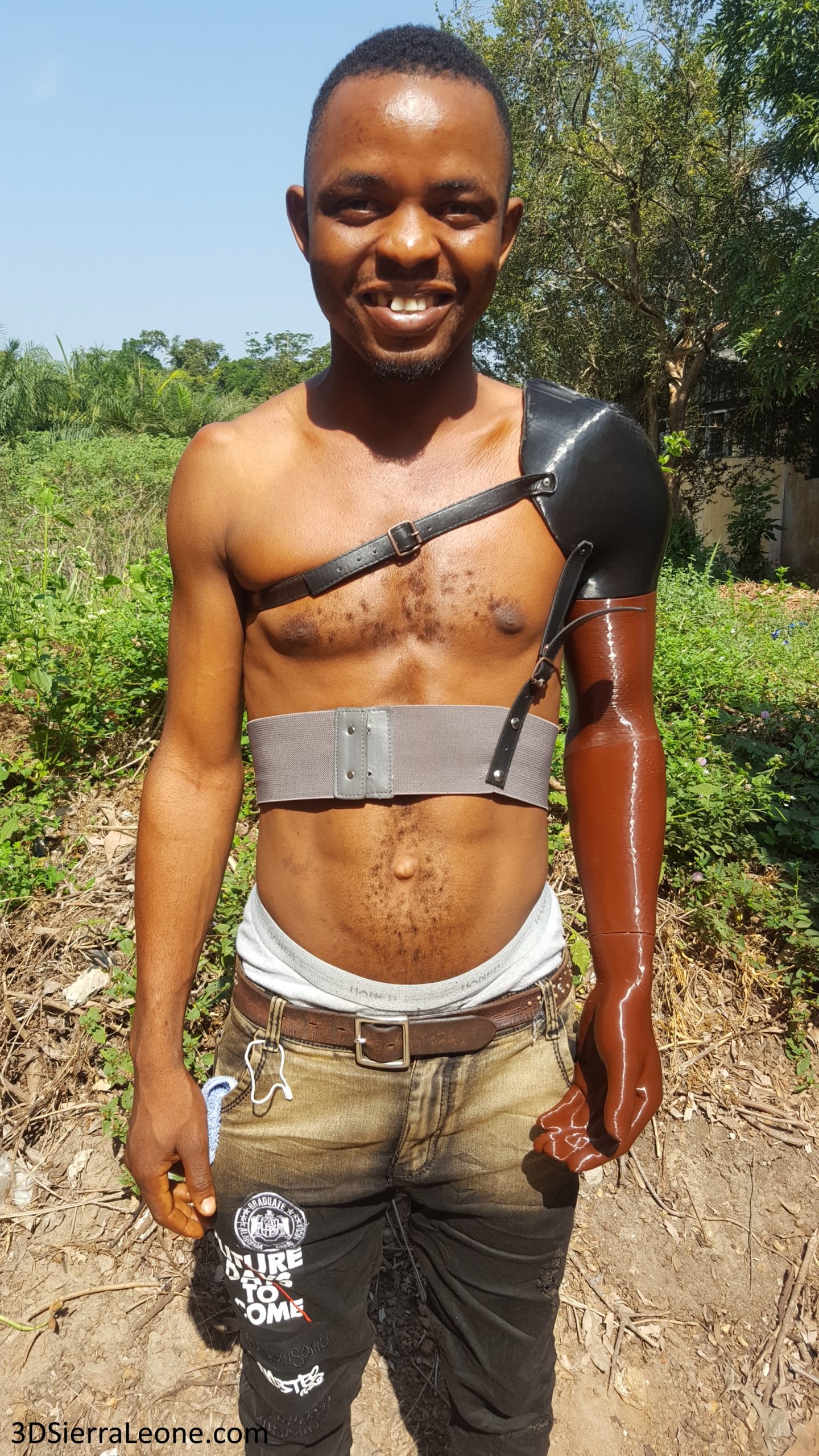 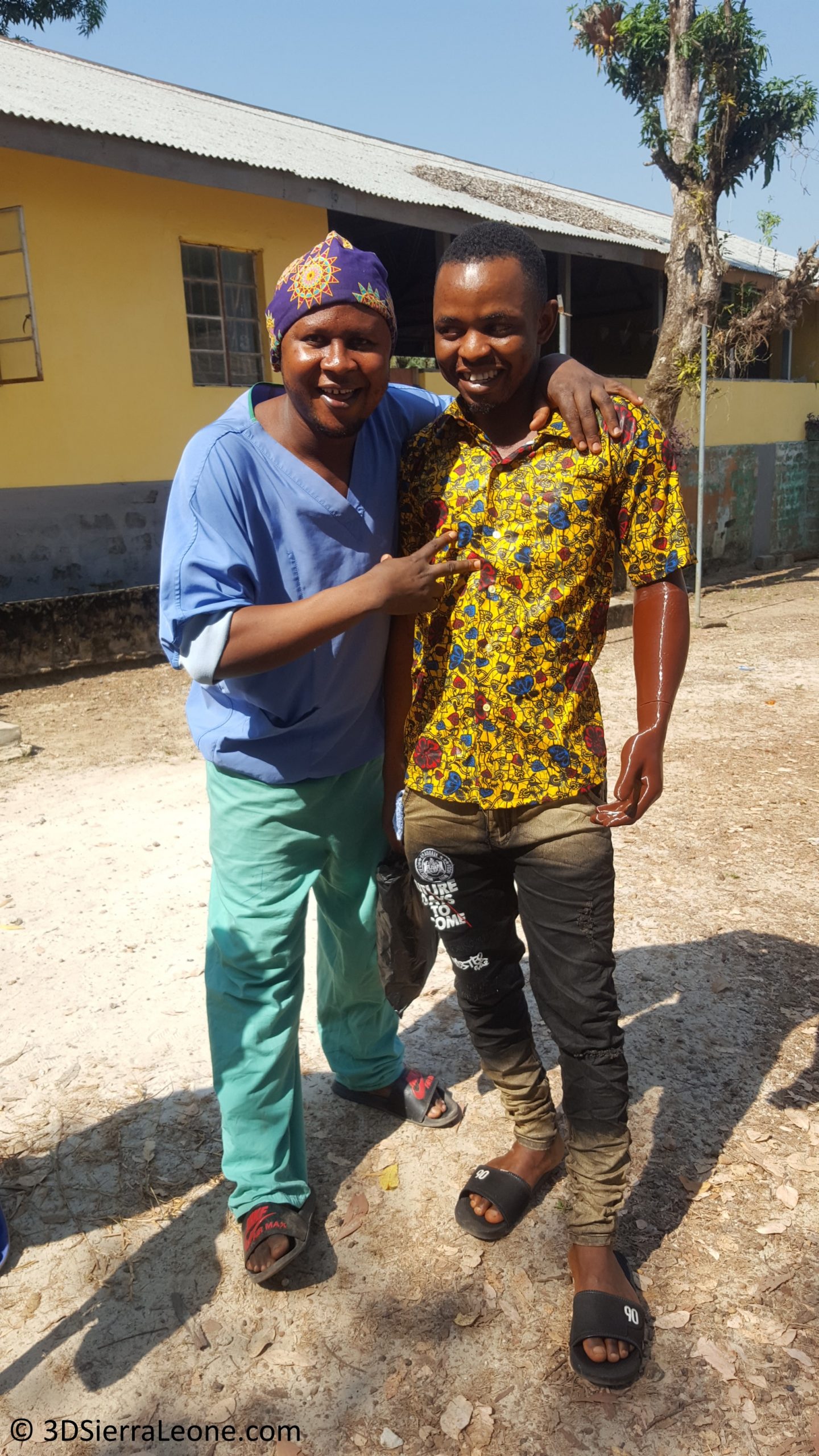 We met a woman who was very insecure about her amputated hand. She was wearing her stump under her skirt for the whole day long. When we asked her how it happened, we got a short answer: her hand was cut off during the civil war, about 25 years ago. The amputation keeps reminding her of this awful period.

Using 3D scanning and 3D printing, we were able to make a prosthesis for her. The prosthesis helped her with daily activities. Besides this, she was not wearing her hand under her skirt anymore, enabling her to use her amputated arm. Instead of being ashamed of her stump, she now proudly shows her prosthesis to the outside world.

A few weeks ago, we received this photo. Mariatsu gave birth to this little boy. The picture shows that she is still wearing the prosthesis with pride. 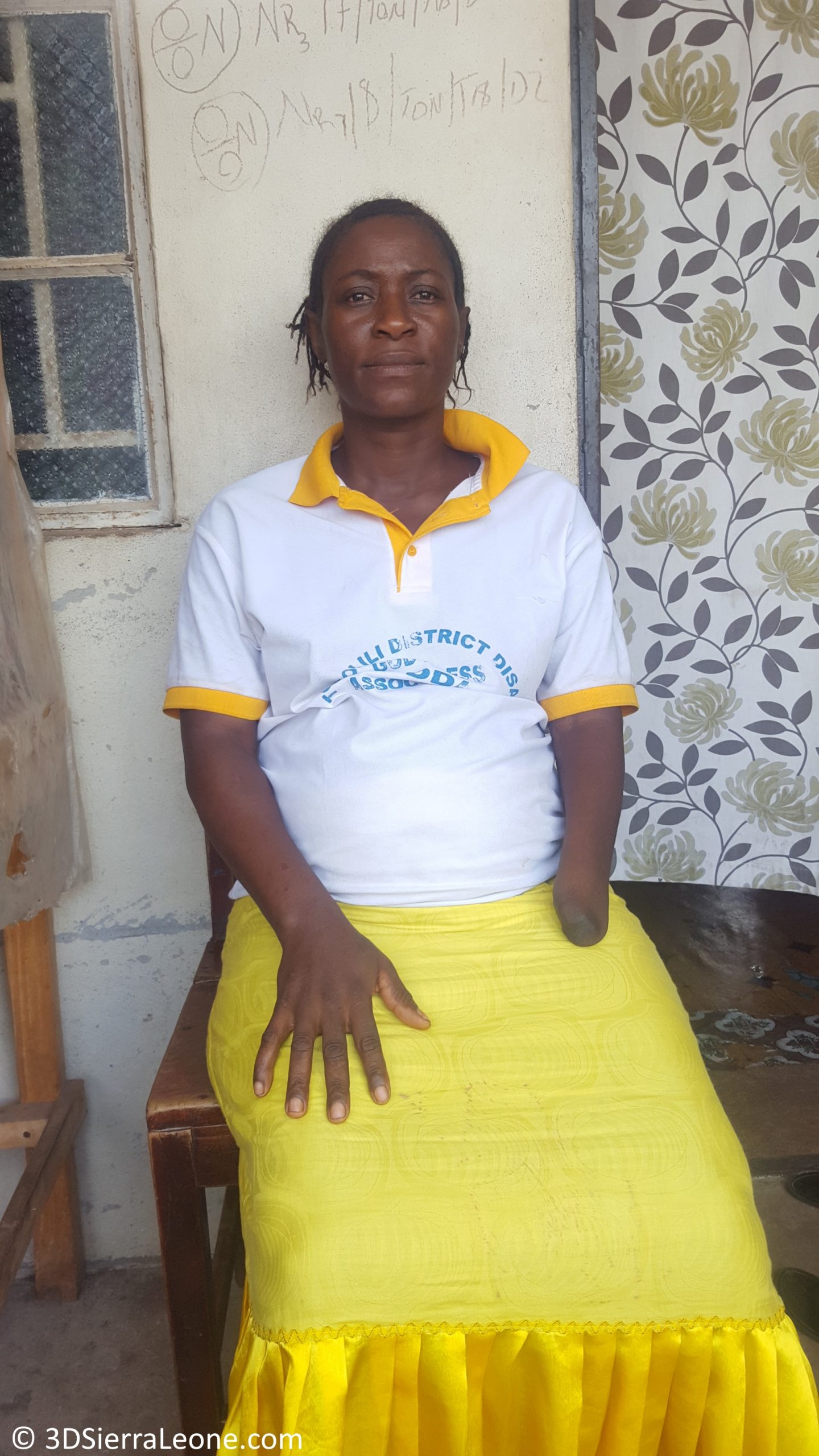 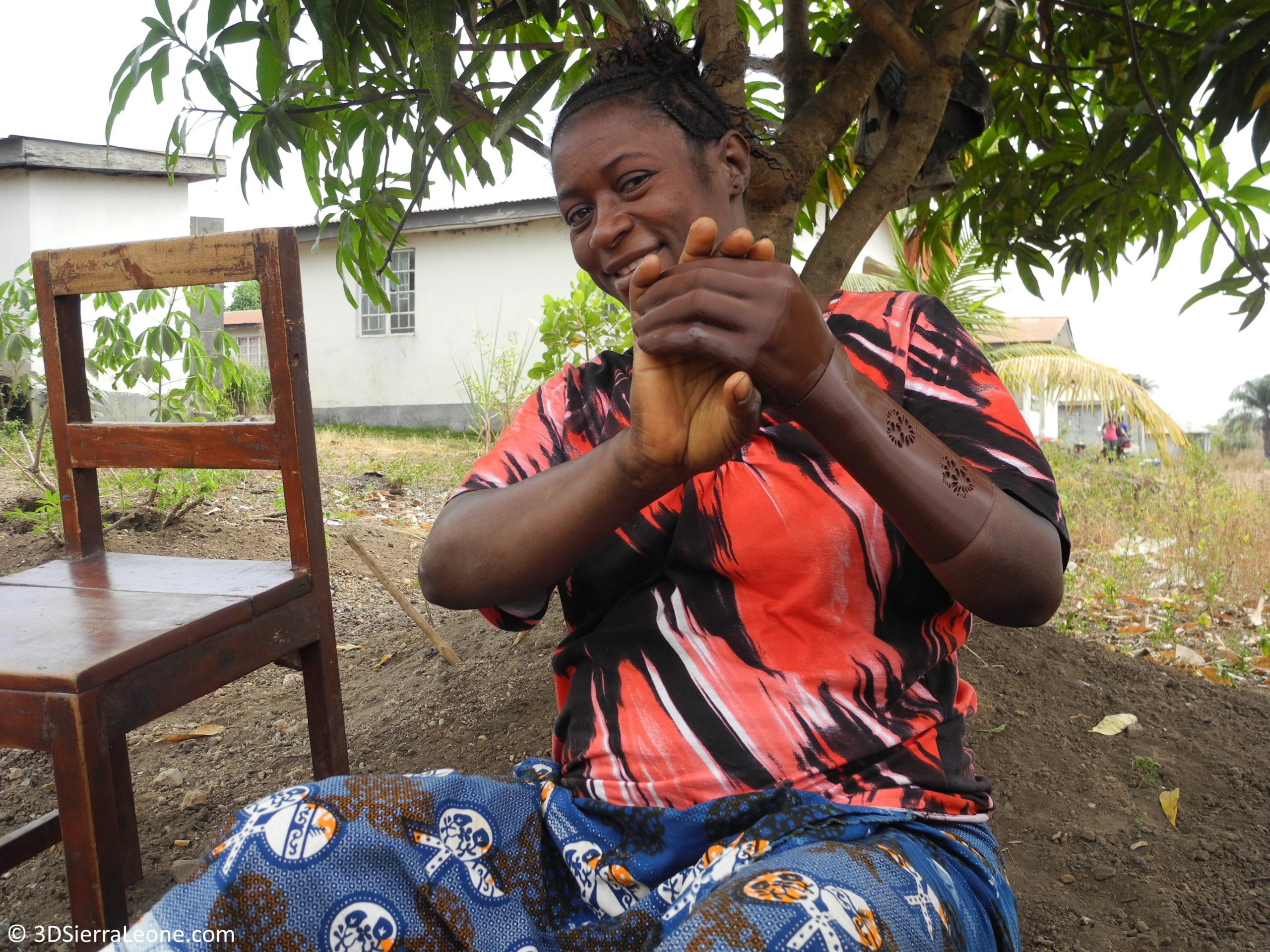 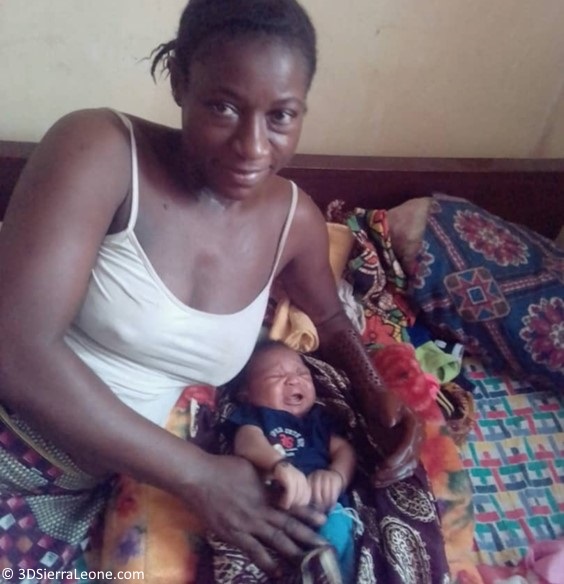 THE BOY
WITH
THE BRACE

This boy has kyphoscoliosis, an abnormal lateral curvature of the spine. Currently, there are no medical devices or solutions for people with this condition in Sierra Leone. With the help of 3D printing, it was possible to make a custom-made brace. We hope that the brace will prevent the kyphoscoliosis from getting worse. Soon, we will continue to follow this boy, with the prospect of making new braces for him as he grows. 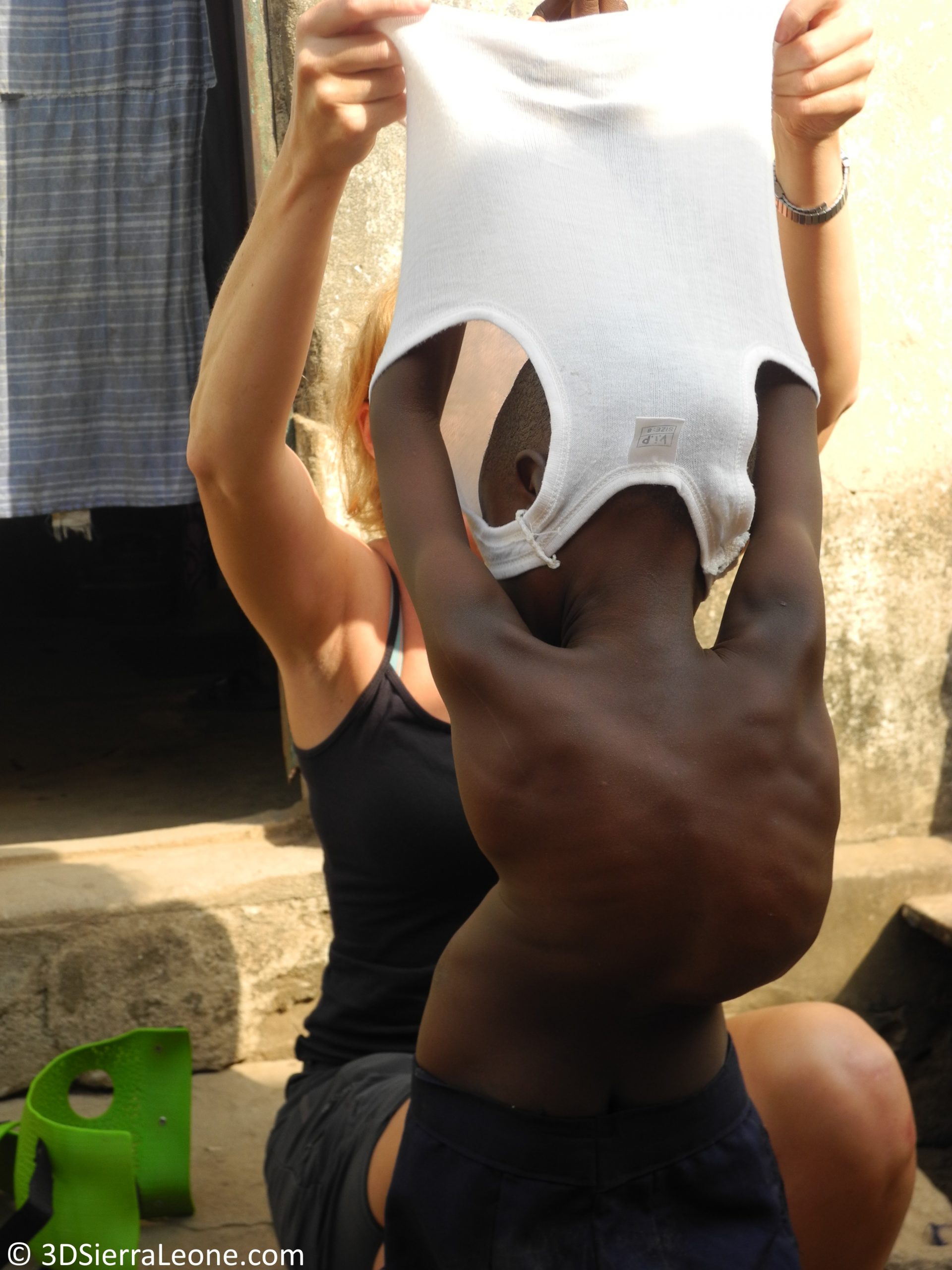 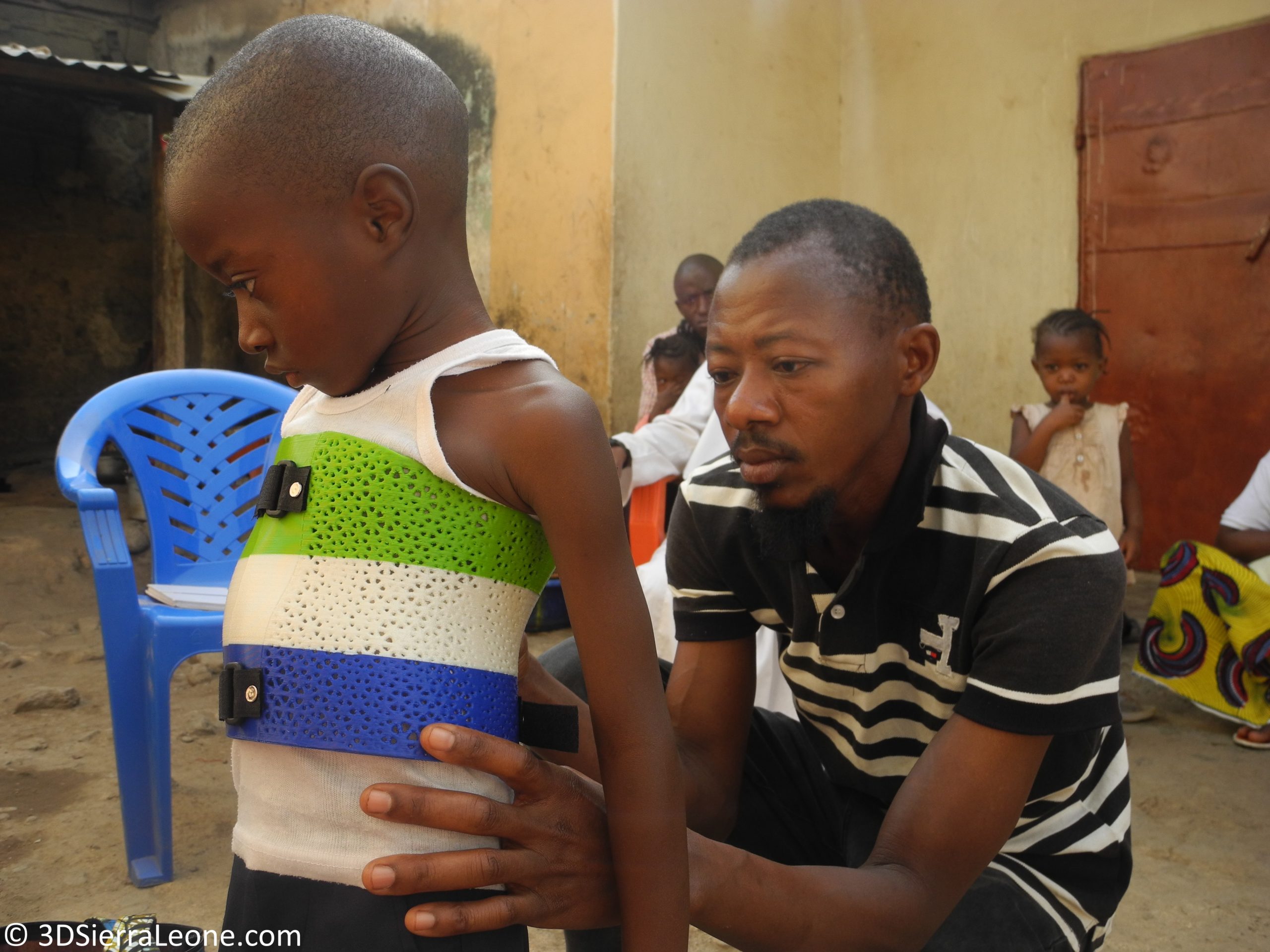 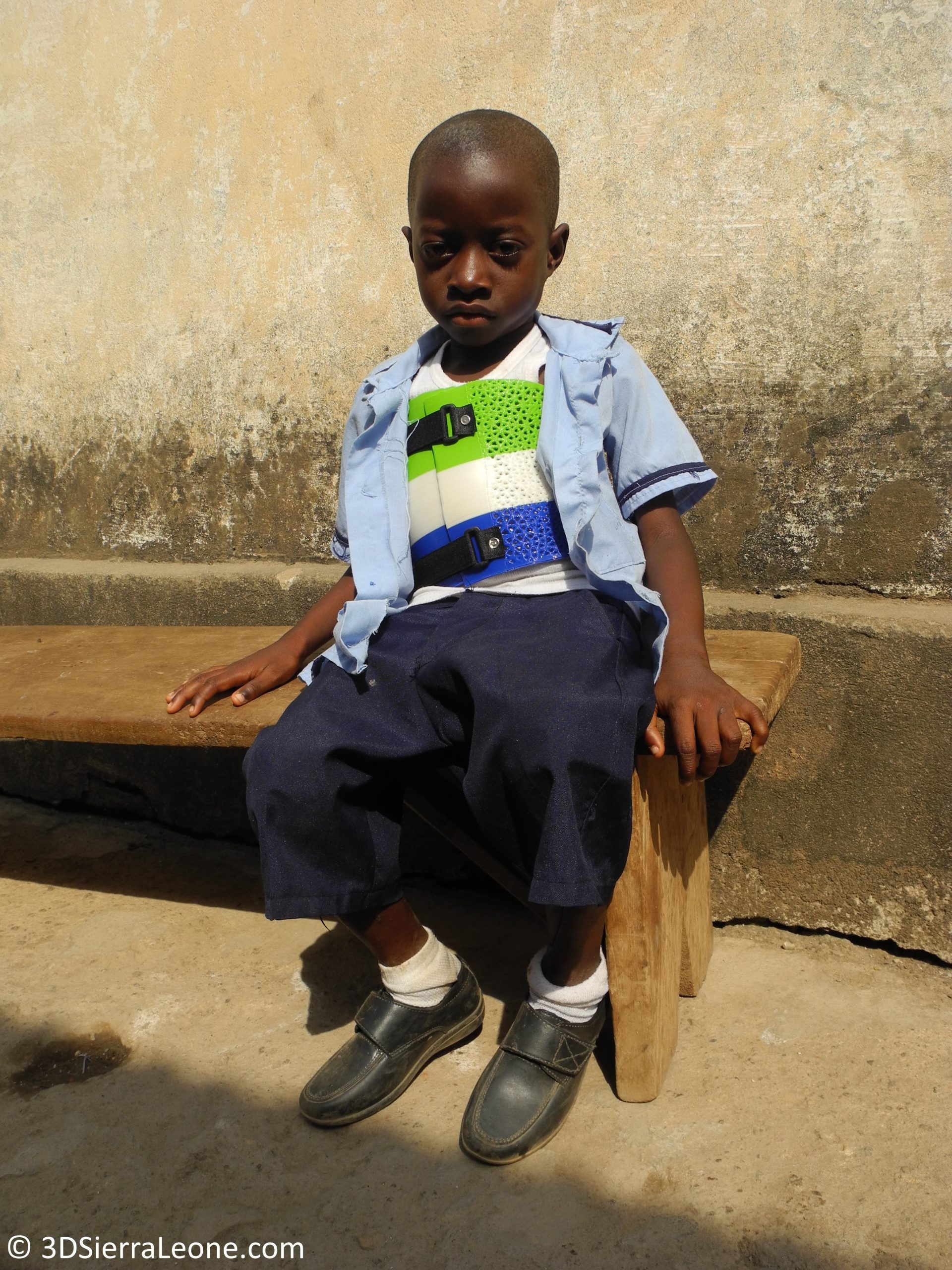 These children have burn contractures. The burns were around a joint. If the burn starts to heal, the skin will contract. It makes that the joint cannot move anymore. Doctors have performed a skin transplant. The skin from the abdomen is placed in the elbow to provide more freedom of movement. After the operation, a splint must be applied against the contracture. Otherwise, the wound will contract again. This operation combined with the splint ensures that the children can keep using their arm. 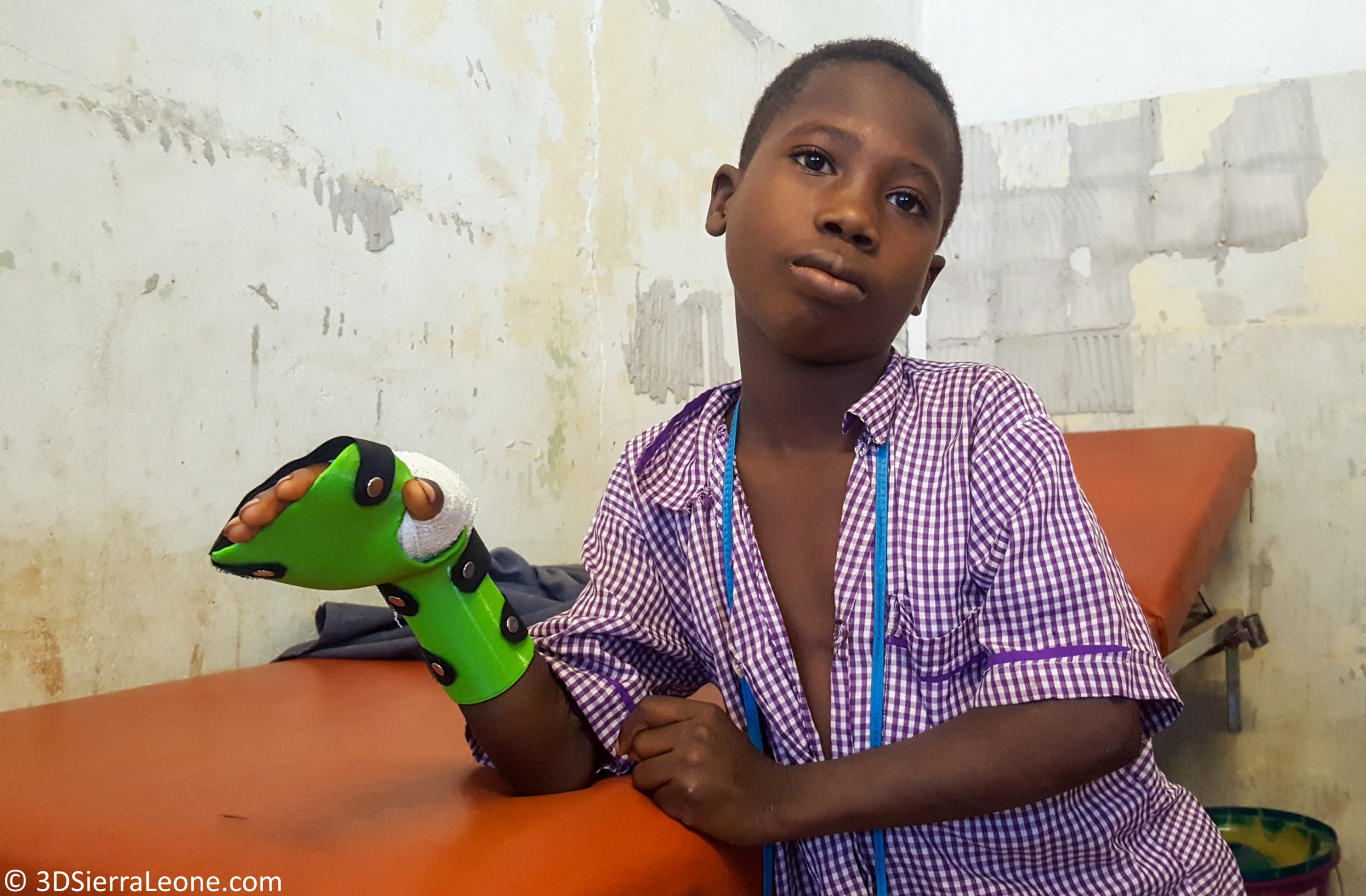 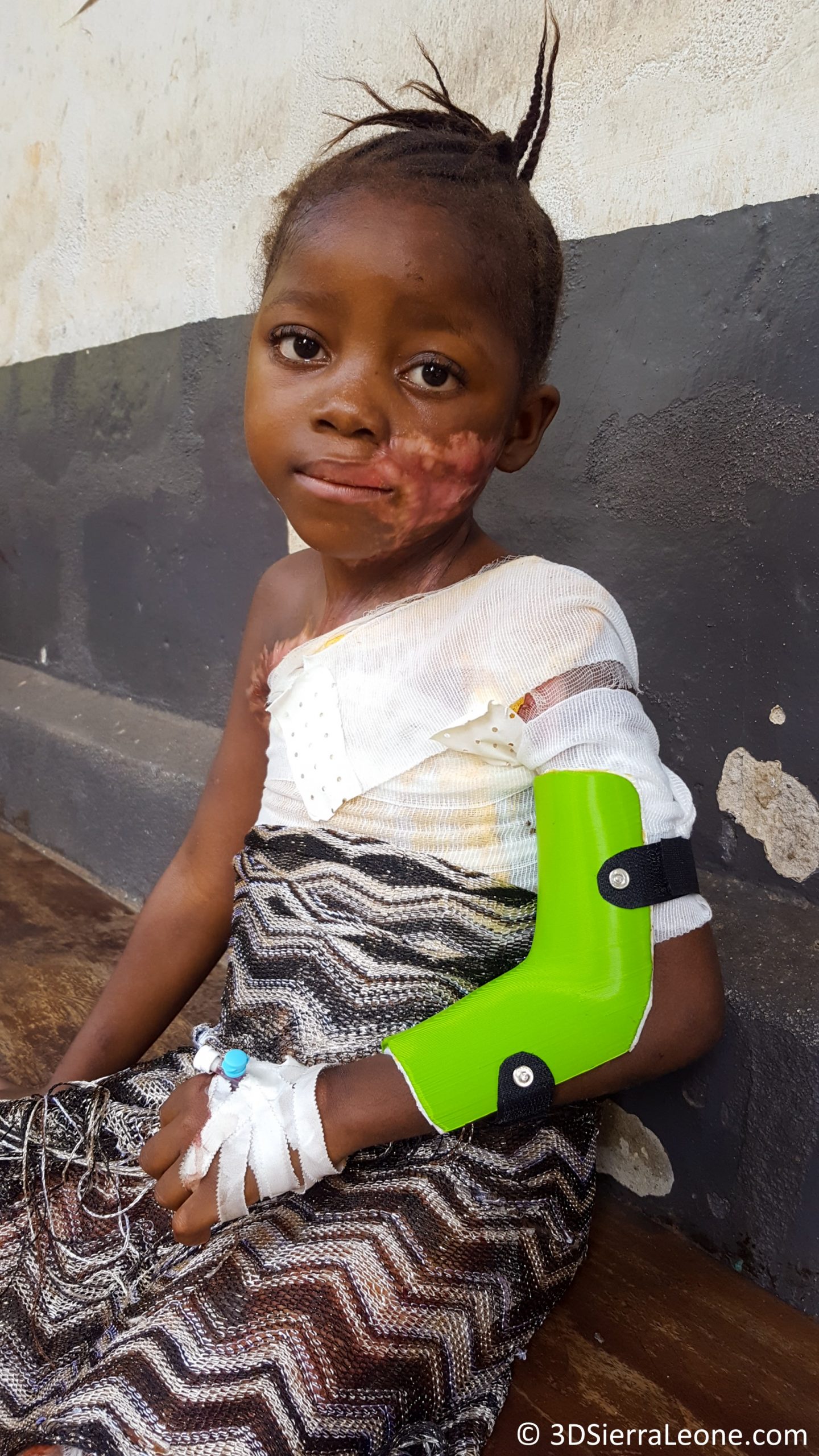 * Ethical approval for this study was obtained from the Sierra Leone Ethics and Scientific Review Committee.

* Patients who received a prosthesis will be followed-up in the months to come.